Sarvam is a 2009 Indian Tamil romantic thriller film co written and directed by Vishnuvardhan. It stars Arya and Trisha Krishnan in the lead roles, while J. D. Chakravarthy, Prathap Pothan, and Indrajith play other prominent supporting roles. The film, which had been under production since late 2006, was produced and distributed by K. Karunamoorthy and C. Arunpandian under the banner of Ayngaran International Films. It was filmed by Nirav Shah and edited by Sreekar Prasad. The film score was composed by Yuvan Shankar Raja, who composed the soundtrack as well, which was released on 14 February 2009, coinciding with Valentine's Day. 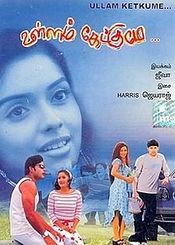