Subramaniapuram is a 2008 Tamil period drama film produced, written, and directed by M. Sasikumar. The low-budget film received critical acclaim for its original script, expert direction, screenplay, editing, accurate sets and costumes to resurrect Madurai from the 1980s. Sasikumar cast then relatively new actors Jai, Swathi, Ganja Karuppu and himself in pivotal roles. Shot in 85 days, it became one of the biggest commercial successes of the year. The movie was dubbed into Malayalam under the same name and remade in Kannada in 2012 as Prem Adda. Director Anurag Kashyap had revealed twice that this movie was the inspiration for his Gangs of Wasseypur series - once in 2010 and once on the 10th anniversary of this movie. 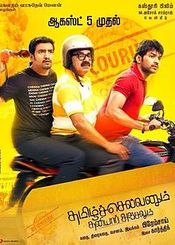